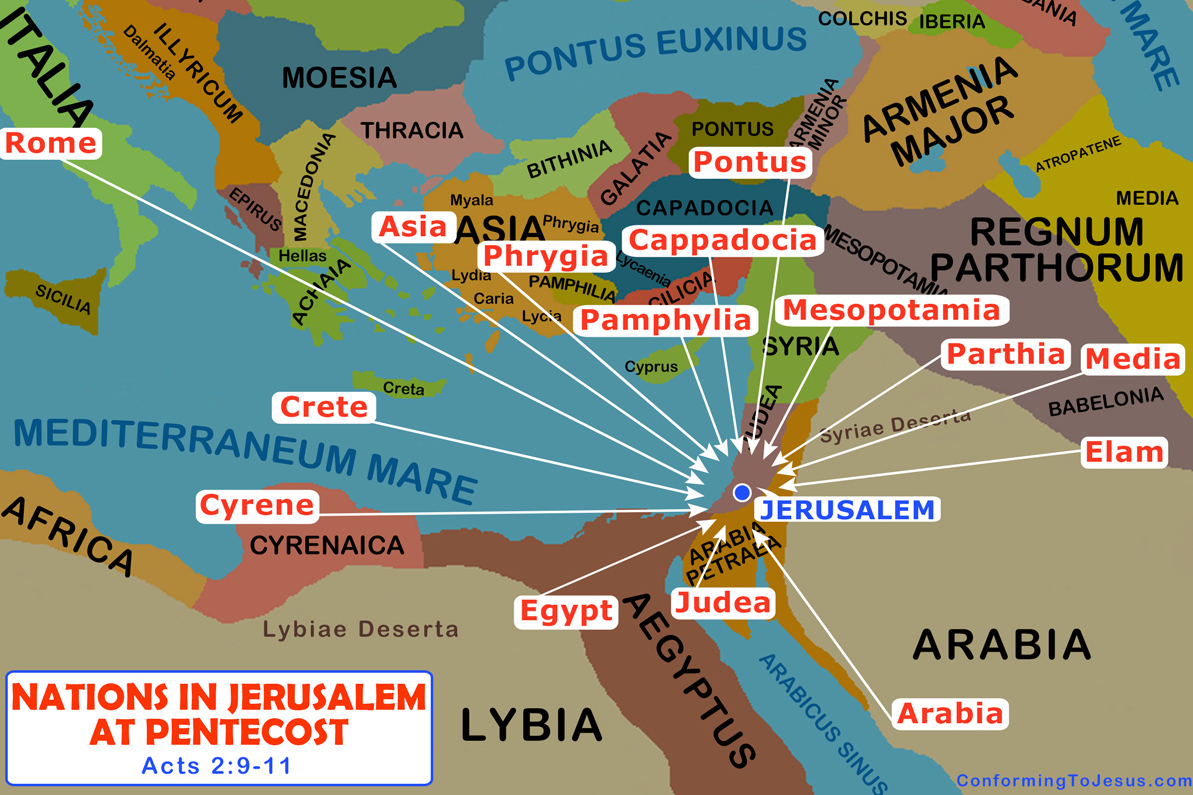 Who are all these people, anyway? And where are all these places they came from? And why were they there when the Apostles, “filled with the Holy Spirit, began to speak in different tongues”?

First of all, Pentecost was a Jewish Pilgrimage Feast, celebrating Shavuot, the Feast of Weeks, occurring seven weeks after Passover and commemorating Covenant and the giving of the Torah on Mount Sinai. For Christians, the gathering of the nation of Israel at the foot of Mount Sinai to receive the Torah from Moses prefigured the gathering of all nations in Jerusalem to hear the announcement of the Kingdom of God by the Apostles.

For at least five hundred years, a large number of Jews lived in the Diaspora, in cities scattered throughout the Mediterranean basin and the Near East. Many of the most devout Jews would try, whenever possible, to make the long and difficult trip to Jerusalem for the three “Pilgrimage Feasts”: Passover and Shavuot (Pentecost) in early and late spring respectively, and Sukkot (Tabernacles or Booths) in the fall.

At the time, Jews living outside Palestine numbered about 5,000,000 – far more than those who remained in Jerusalem, Judea and Galilee. These pilgrimages were important for them to connect with their roots and maintain their heritage and identity in an often-hostile Greco-Roman. For them, the new of the Promised Messiah and Savior of Israel should have been good news indeed.

Jesus was not, however, the kind of Messiah most people expected, which, sadly gave rise to controversy and rejection by many. Whether a crucified and risen Savior is good news or not depends a lot on your expectations, doesn’t it?

The map in the image above shows where these people came from. It would be time well spent to look up each of those places in WikiPedia to learn a but more. Here’s the relevant paragraph from the WikiPedia entry on Pentecost giving helpful links:

During the Hellenistic period, the ancient harvest festival also became a day of renewing the Noahic covenant, described in Genesis 9:8-17, which is established between God and “all flesh that is upon the earth”.[15] By this time, some Jews were already living in Diaspora. According to Acts 2:5-11there were Jews from “every nation under heaven” in Jerusalem, possibly visiting the city as pilgrims during Pentecost. In particular the hoi epidemountes (οἱ ἐπιδημοῦντες) are identified as “visitors” to Jerusalem from Rome. This group of visitors includes both Jews and “proselytes” (προσήλυτος, prosēlytos); sometimes translated as “converts to Judaism”, proselyte was a term used to describe non-Jews who adhered fully to the Mosaic laws, including circumcision.[16]
The list of nations represented in the biblical text includes Parthians, Medes, Elamites, Mesopotamia, Judaea,[iii]Cappadocia, Pontus, Asia, Phrygia, Pamphylia, Egypt, Cyrene, and those who were visiting from Rome.[17] Scholars have speculated about a possible earlier literary source for the list of nations including an astrological list by Paul of Alexandria and various references to the Jewish diaspora by writers of the Second Temple era (particularly Philo of Alexandria).[18]

How many pilgrims would have been in Jerusalem on that Pentecost? First, estimates of the population of Jerusalem at this time vary from an improbable low 20,000 to an improbable high of over a million. The best guess seems to be around 100,000. I haven’t been able to find a good estimate as to how many pilgrims from the Diaspora might have been there – some websites claim an improbable three million pilgrims would have descended on Jerusalem for the Pilgrimage Feasts. My guess would be a maximum of 30,000 or so, with 10,000 or less being more likely. A city with only 100,000 people simply wouldn’t be able to handle more than that.

Moreover, travel under the best of circumstances in those days was long, arduous, expensive and dangerous, not impossible but beyond the means of any but the fairly wealthy and highly motivated. Nazareth, for example, was only about 90 miles from Jerusalem, but that journey on foot would have taken three days. Luke tells us that Joseph and Mary, with Jesus went up to Jerusalem with a caravan of fellow pilgrims for Passover every year (Luke 2:41). That means the whole pilgrimage from Nazareth – departure to return – would have been well over a week at minimum. A long time for a poor family to be without work.

What languages did these people at this first Pentecost speak? I think it’s safe to assume that most people able to travel those distances would be at least somewhat multilingual, meaning they could get along fairly well in Greek the universal language of he Roman Empire in those days. (Paul and the Apostles spoke Greek everywhere they went and were well understood.) Observant Jews would know a fair amount of Hebrew to study the Torah. The “native languages,” spoken at home and in their ordinary daily communication, would, however, vary widely: Aramaic, Syriac, Coptic, Arabic, and many others. It’s worth thinking about that, while they could all have understood the Gospel in common Greek, the Holy Spirit chose to communicate with them in their own most familiar and comfortable way. I think that not so much a miracle as sign to us that we have to approach people on their terms, not ours.

Maybe that’s the big takeaway from this event.