What I wrote below was in anticipation of the day. Here’s what happened. We took a taxi to the Ostia Lido, and wandered around the beach area. Then a train St. Paul Outside the Walls, where we encountered a large group of pilgrims from Berlin celebrating the 25th anniversary of the fall of the BerlinWall.

Tomorrow, we meet the rest of the pilgrims at the airport (15 min away), to bus to Assisi.

Today there will be opportunities to relax, possibly wandering around the modern  town of Ostia with its beautiful waterfront and beach, of course discovering a good coffee bar or trattoria.

The excavations (scavi) of Ostia Antica hold a special attraction for us Pilgrims. Rick Steves says, “Wandering around the ruins today, you can see the remains of the docks, warehouses, apartment flats, mansions, shopping arcades, and baths — all giving a peek at Roman lifestyles.” There are many temples to Mithras, a pagan cult popular among sailors which was was a significant rival to early Christianity. 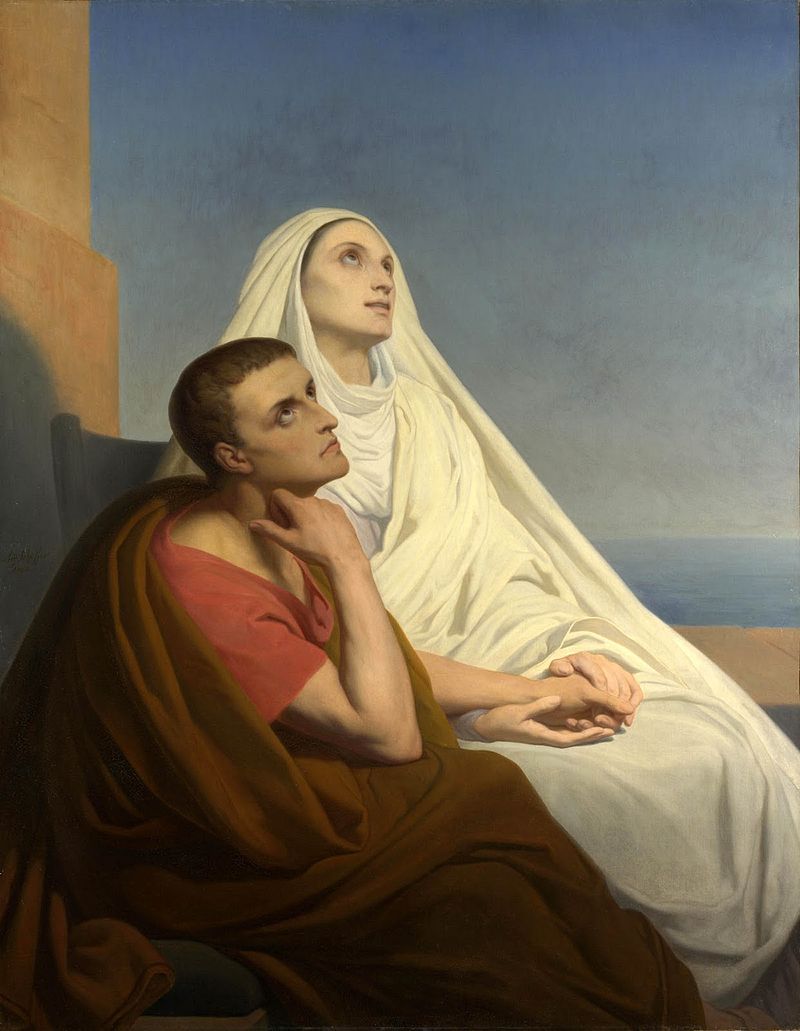 More pertinent for our purposes, Ostia was the place where St. Augustine and his mother, Monica, had a touchingly intimate conversation about eternal life sitting at a window overlooking the sea. She told him that her purpose in life had been accomplished because he had been converted and baptized, and she had no other reason to remain here as a glorious union with God awaited. A few days later she fell ill, and before she died she expressed her desire to be buried there in Ostia, rather than being taken back to her native Tagaste (now Souk Ahras, Algeria) in North Africa. She was buried at the church of St. Aurea, (now near the scavi) and later her remains were transferred to the Basilica of St. Augustine in Rome.

You have made us for yourself, and our hearts are restless, until they can find rest in you.

Late have I loved you, beauty so old and so new: late have I loved you. And see, you were within and I was in the external world and sought you there, and in my unlovely state I plunged into those lovely created things which you made. You were with me, and I was not with you. The lovely things kept me far from you, though if they did not have their existence in you, they had no existence at all. You called and cried out loud and shattered my deafness. You were radiant and resplendent, you put to flight my blindness. You were fragrant, and I drew in my breath and now pant after you. I tasted you, and I feel but hunger and thirst for you. You touched me, and I am set on fire to attain the peace which is yours.